As many of you know storing food for an emergency or disaster  has become more necessary than ever.  We had been looking for emergency foods and supplies we could use for daily use and for long term storage.
We found Thrive Life (Formerly Shelf Reliance) and quickly realized this was it!  After sampling the amazing food, as well as realizing there was an opportunity to assist others in preparedness, we were in.
Our goal is to raise awareness and help individuals, churches, and groups of people be prepared when the inevitable happens.
We live just north of Seattle, WA.
We have two teenage children who also love the food.
Please contact us to set up a demonstration and sample some amazing food for your home, church or office.

We specialize in the "Party by Mail" where we can send you some free samples so you can hosta tasting party.

Back to blog home

By JUNG-YOON CHOIMay 18, 2014 12:58 PM
Would you be ready for a building colapse?  If you survived and all of your possestions were lost what would you do?  Be sure to get a 72 hour bag. http://www.foodlife.thrivelife.com/2-person-survival-pack.html
TouchVision NORTH KOREA APOLOZIES
 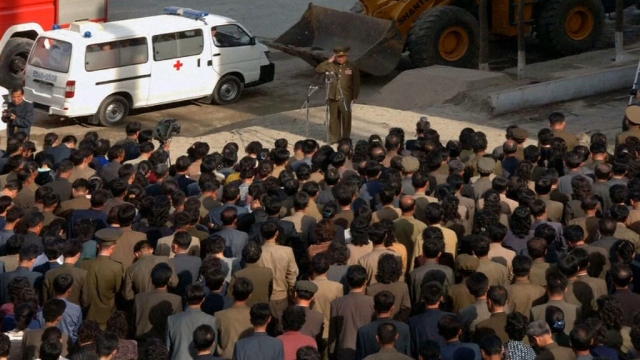 SEOUL, South Korea (AP) — North Korean officials offered a rare public apology for the collapse of an apartment building under construction in Pyongyang, which a South Korean official said was believed to have caused considerable casualties that could mean hundreds might have died.

The word of the collapse in the secretive nation's capital was reported Sunday morning by the North's official Korean Central News Agency, which gave no death toll but said that the accident was "serious" and upset North Korea's leader, Kim Jong Un.

The report said it occurred in the capital's Phyongchon district on Tuesday "as the construction of an apartment house was not done properly and officials supervised and controlled it in an irresponsible manner."

In Seoul, a South Korean government official speaking on condition of anonymity because of the sensitivity of the information said the 23-story apartment building that collapsed was presumed to have housed 92 families.

That could mean the casualties could be in the hundreds because a typical North Korean family has four members. However, it was not clear whether all the residents were inside at the time of the collapse, or that four people lived in each apartment.

It is not unusual for people to start living in apartments before the construction is complete.

In this Saturday, May 17, 2014 photo, families of victims of an accident at an apartment constructio …

The official said he did not have any figure for the actual death toll.

According to the KCNA report, the rescue operation ended Saturday and officials apologized to bereaved families and district residents.

On the streets of Pyongyang on Sunday, residents expressed outrage over the incident.

"This accident happened because they broke the rules and methods of construction," resident Pak Chol told The Associated Press. "After this accident, we must make sure that this kind of terrible accident never happens again, by sticking to the proper method of building."

Another resident, Hong Nam Hyok, said that "everyone in Pyongyang is now sharing the sorrow of the victims and the bereaved families." 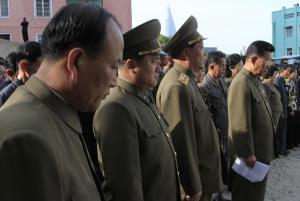 In this Saturday, May 17, 2014 photo, North Korean officials stand among the families of victims of  …

The KCNA report cited one official as saying Kim Jong Un "sat up all night, feeling painful after being told about the accident."

North Korea's highly controlled state media rarely report news that might be considered negative, and an admission of fault by the government is unusual.

The country regularly blames South Korea for starting the 1950-53 Korean War, although outside historians say that the North attacked first. North Korea also denies responsibility for an attack on a South Korean warship that killed 46 people in 2010, despite a South Korean-led international investigation that blamed a Pyongyang torpedo.

Sometimes, however, the country owns up to failures. Many were surprised when the North admitted in 2012 that a high-profile rocket launch fizzled soon after takeoff — an acknowledgement that followed Pyongyang's claiming of success for other such launches that foreign governments said had been failures.

The building collapse came at a time when the South Korean government has received near daily criticism from its citizens as well as regular bashing by North Korean media for its handling of last month's ferry sinking that left more than 300 people dead or missing.